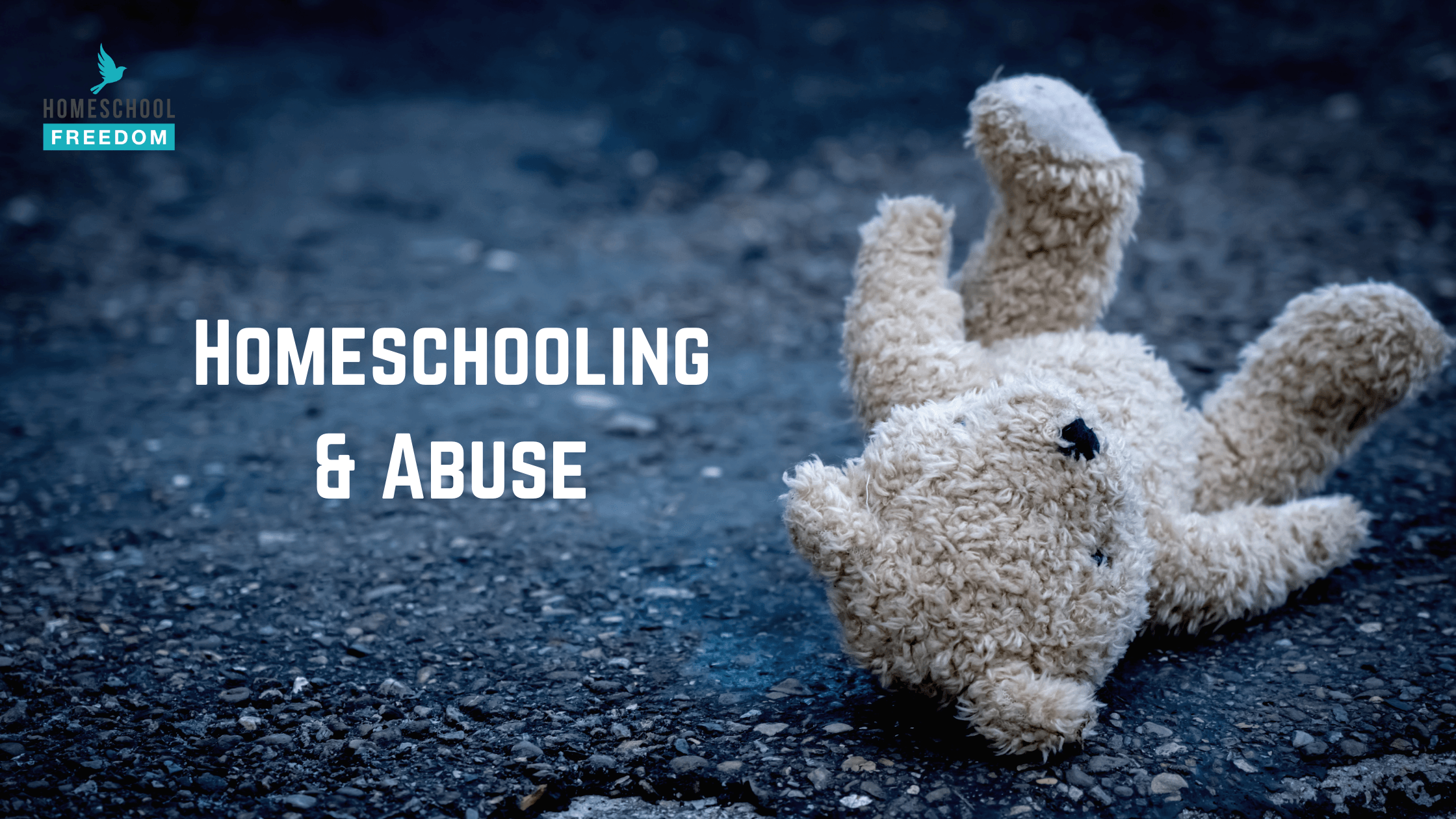 In 2015 in Michigan, a mother was arrested for killing two of her children and hiding them in the freezer. It turns out that the two children had been dead for two years. Immediately, questions were raised as to how two children could be missing that long, without anyone noticing. No relatives, no neighbors, no school officials, no social workers…no one knew they were gone.

When the mother was arrested, she insisted that her children had been homeschooled. In Michigan, there are no reporting, or standardized testing, requirements for home educated students. This led to a Democratic state representative drafting a bill that would have required annual reporting to local school districts and mandatory bi-annual visits for homeschoolers with CPS workers, police, doctors, psychologists, etc.

In MN in 2015, a seven-year-old boy died from what prosecutors charged was medical neglect. The family was reportedly homeschooling their son. In 2016, a sixteen-year-old girl, who has reported to be a homeschooler in West Des Moines, Iowa died. The parents were charged with starving their adopted daughter to death.

On January 15, 2018, news stories out of California have reported allegations of horrible abuse of thirteen children who were reportedly starved and handcuffed by their parents. With this situation being so fresh, it’s clear that there are many still many questions unanswered. One thing is clear. This situation puts the spotlight back on allegations of abuse in the homeschool community.

Situations like these have caused some critics to question what they consider to be too lax regulations regarding homeschooling in various states. They said that it was homeschooling, and lack of access to the home by government officials, that allowed for these abuses and deaths.

Is it true that greater academic oversight of ALL homeschoolers would protect children from physical and/or sexual abuse or death?

There was no credible evidence that the mother in the Michigan story was intentionally homeschooling her children in any way. She was not a member of any known homeschool associations, did not attend any homeschooling events, and did not produce any credible homeschooling curriculum.

But that glaring fact aside, would her children have been safe if homeschooling was more regulated? Would standardized testing, or annual reporting, have kept her children from being killed?

It should be self-evident that people who disobey laws (like laws that prohibit them from abusing their children), will simply ignore and avoid additional laws that purport to prevent future crime. Additional regulations and restrictions on homeschooling really just create needless bureaucracy and cumbersome intrusions for the multitudes of loving, law-abiding parents who are now suspiciously categorized by the government as potential future criminals.

Homeschooling is Not a Risk Factor for Abuse

In 2016, the U.S. Department of Health & Human Services (Administration for Children & Families) released a report on known factors related to abuse and child neglect.

According to this government report, there are a few demographic groups who are known to be at a higher risk for abuse than the rest of the populace. Home educators were not included in this list. There is no known predisposition for abuse among those who choose to home educate their children.

To suggest that parents who are investing their own time and resources to teach their own children at home is a “red flag” for potential abuse, is to suggest that what we need in our culture is less parental involvement in education, when all research available to us resoundingly reinforces the fact that we need far more.

According to research, it has been demonstrated that the states that have the most legal restrictions on homeschooling, do not perform any better on academic achievement tests. So more regulations do not even produce better academics for homeschoolers.

How Do We Stop Abuse?

As bad as we would all like to, we simply cannot completely prevent abuse before it starts. At least not through governmental solutions. Abuse and neglect are prevented by people who care. The one thing the government can and should do, is enforce the perfectly adequate child abuse laws that exist in every state in the U.S. As with most of our societal ills, we don’t need additional laws. We need the consistent application of the laws that are already in place.

If a child is being abused by a parent, those parents need to be prosecuted under the existing laws in that state. But we dare not seek to punish all families because of the potential future actions of a few. Very often it is argued, by opponents of home education, that children are safer in public schools than they are with their own parents. But is there any evidence that would support this? The fact is, thousands of children, who attend public schools, are abused by their parents every year. This abuse often goes undetected, year-after-year, by trained school officials and staff.

Public Schools are Not Abuse-Free Zones

Many advocates would suggest placing that child into a public school system as the solution to protect them from potential abuse from their parents. But now the child simply faces a new predator danger: Teachers who prey sexually on their students.

The U.S. Department of Education has published a report on “Educator Sexual Misconduct.” It reveals that over 10% of students experienced some kind of sexual misconduct in their high school years in public school.

The online site, WorldNetDaily.com, has compiled an alarmingly large list of teachers who have been prosecuted for being sexual predators to students in their classrooms.

Homeschoolers are Less Likely to Be Sexually Abused

The Gen 2 Survey, one of the largest studies on the Millennial generation, with almost 10,000 participants revealed that students who are homeschooled are actually 257% less likely to be sexually abused than students who are in public schools.

With estimates of approximately 2.3 million students being safely and successfully home educated in America, there is good reason to argue that it is the government-run school system, not home-based, parent-directed learning centers, that pose the greatest physical risk for students.

Physical violence is also a great risk on a public school campus. “During the 2013–14 school year, 65 percent of public schools recorded that one or more violent incidents had taken place, amounting to an estimated 757,000 incidents. This figure translates to a rate of approximately 15 crimes per 1,000 students enrolled in 2013–14.”

So the notion that children would be far safer in a public school classroom than they are with their parents and siblings, is simply not supported by the available data.

Blaming the Educational Setting for Abuse

When a child enrolled in the public school system is abused by his or her parents, no one says, “We need to have stricter teacher certification laws,” or “We need better annual standardized tests,” or even, “All public schooled students need to have mandatory home visits by CPS!” No, people do not think to blame the educational system for abusive parents. Neither do they seek to violate the basic, fundamental rights of all innocent parents because they are suspected of potential future crimes against their children.

So why the double standard when it comes to home educators? Why shouldn’t homeschoolers receive the same basic courtesy afforded to those in a public school setting? If parents abuse their children, then by all means, prosecute those parents to the fullest extent of the existing child abuse laws in your state.

We all want to see children protected and violence against children stopped. But we should make sure that we use methods that actually work, instead of creating needless government red-tape for parents who love their children and want to teach them at home.

Israel Wayne is an author and conference speaker who has a passion for defending the Christian faith and promoting a Biblical worldview. He is the author of the books Questions God Asks, Questions Jesus Asks , Pitchin’ a Fit: Overcoming Angry and Stressed-Out Parenting, Education: Does God Have an Opinion? and Answers for Homeschooling: Top 25 Questions Critics Ask and Raising Them Up: Parenting for Christians. He is also the site editor for ChristianWorldview.net and the founder of Family Renewal. Israel and his wife, Brook, are raising their 11 children in SW Michigan.